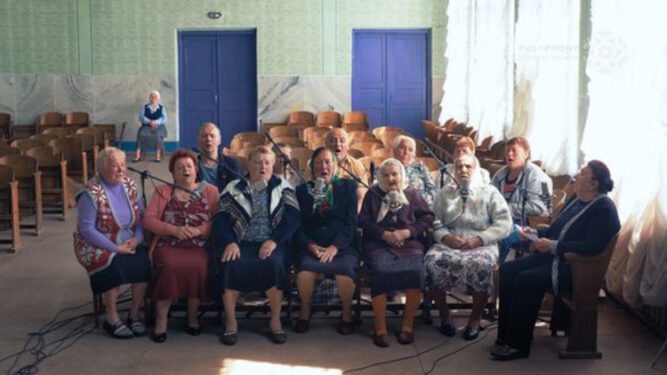 I thought it might be good to acknowledge the work of Miklos Both, who has for the last fifteen years or so been traveling around Ukraine (and later Hungary) making high-quality recordings of traditional village songs sung by elders (mostly women). The idea was to bring the equipment to the singers so as to allow them the comfort of being in familiar surroundings while the recorders were rolling, and the result has been the creation of an extraordinary collection of old and beautiful songs, the largest ever made in Ukraine. The idea is called The Polyphony Project, and it has since its inception become something of a model for the capture and documentation of music that is under the threat of extinction in various places all over the world where rapid development has radically changed life for ordinary people in a very short time. As Ukrainian journalist Kateryna Bschynska wrote recently,

“This project is not just about singing nice songs or recording folk melodies. It’s more about supporting ancient traditions, ideas, and it’s about passing them on to future generations. It’s about preserving our heritage today… because tomorrow may be too late. Songs and chants live only when they are transmitted by living voices, persons that know them and pass them on. We are not eternal. Therefore, we must act now, record as many songs as possible and pass them on to our kids.”

Here’s a link to one of the recordings, opening a window into the delightful vocal styles of Ukrainian women’s song (and a little humor, too):
https://www.youtube.com/watch?v=0KdMG1NkrWg

Here’s where we’ll be going this month on Odyssey:

Mar. 6– We’ll embark on a look into the origins of Klezmer music this week, starting in Eastern Europe and reaching as far as the Rajasthan in India, before coming back to New York and listening to some classic recordings from the 20’s and 30’s.

Mar. 13– We will wander into southeastern Europe this week, and in particular listen to what’s happening on the brass band dance scene. New music from Georgia and Armenia, along with some traditional recordings, too. As always, we’ll check on what’s new on the whole world stage to wrap up.

Mar. 20– Heading south, and into Greece and Italy, whose dance traditions have more in common that you might think. Always nice to end up on the Mediterranean this time of year, where we will explore for the next few shows.

Mar. 27– Spain has much more to offer than just flamenco, including the Northeast and Catalonia, and the Celtic northwest. We’ll try to take it all in this week, with a quick listen to some new recordings from all over the world.