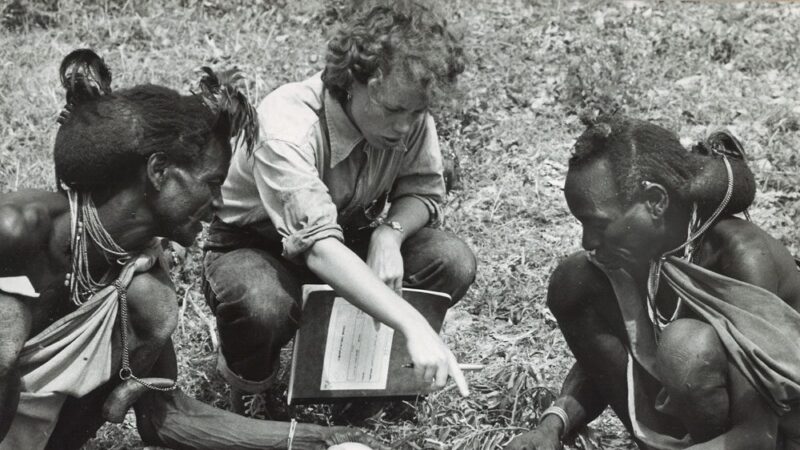 Reflections — Travels in the Kalahari

I have been reading Elizabeth Marshall Thomas’ book, The Harmless People again after many years (I discovered a very tattered copy on my bookshelf that I have had for many decades while looking for something else), and once again was completely overwhelmed with respect and awe for the people she writes about. Our ancestors. Her beautifully written account of her travels in what is now Namibia in the Kalahari Desert with her small family and a few bands of hunter gatherers in 1957 is not only a vivid and poetic account of the lives of members of arguably the most successful culture in human history, one that survived for tens of thousands of years, but a reminder of what we have lost in our headlong rush into the technologically driven labyrinth of an overcrowded and relentlessly acquisitive society here in the West. Her brother John was with her on this trip, and along with her parents, made some ground breaking films documenting these remarkable people, and then returned almost two decades later in 1974 to revisit the same area and reconnect with his friends there. In this later film, made with Robert Young for The National Geographic television series, he discovers that things have changed, and not for the better, but that the spirit of joy in the face of incredible deprivation is still strong. The snippets of music that were recorded in the making of this latter film are among the most beautiful I have ever heard, both simple and elegant, reflecting the natural world in voice and rhythm, and predating the polyphonic music of the ancient highland Congolese to the north, weaving in and out, effortlessly creating patterns that seem woven of light and air. We are all still descendants of that sound, whether we know it or not. Here is a link to the latter film:
https://www.youtube.com/watch?v=ocR6f1ITshA

Expanded program highlights for Odyssey in May:
May 1– Chile is sometimes overlooked as a home to musical traditions that have had repercussions throughout South America, but we will look into some of these delightful sounds as we delve into the southwestern part of the continent this week. Music both from the high Andes and the coastal regions, as well as tango, make up a startling mix of styles.
May 8– We move north this week into Uruguay and Paraguay, both homes to folk music that is little heard in our part of the world, but which are both connected to the larger condombe and milongo sounds of South America which we listened to in our ramblings in Argentina, along with music from Charrua indigenous traditions.
May 15– Bolivia is right in the center of South America, and has musical connections with Andean mountain music, particularly huayno, and also the very different sounds of tropical Santa Cruz in the east. We’ll look into some of the recent recordings that have come into the studio over the last month or so from all over the world as well
May 22– We land in Peru this week, where African influence on its music has been strong for centuries along the west coast, particularly in the city of Lima. Andean folk tradition, as in Chile and Bolivia, plays a large part in the cultural lives of the folks who live in the high country (among the highest places in the world) as well, and we’ll sample some of the best.
May 29– Ecuador is a musical landscape that includes the northernmost Andean music on the continent, but also some pretty surprising urban dance sounds from Quito.
One of our favorite places to visit.