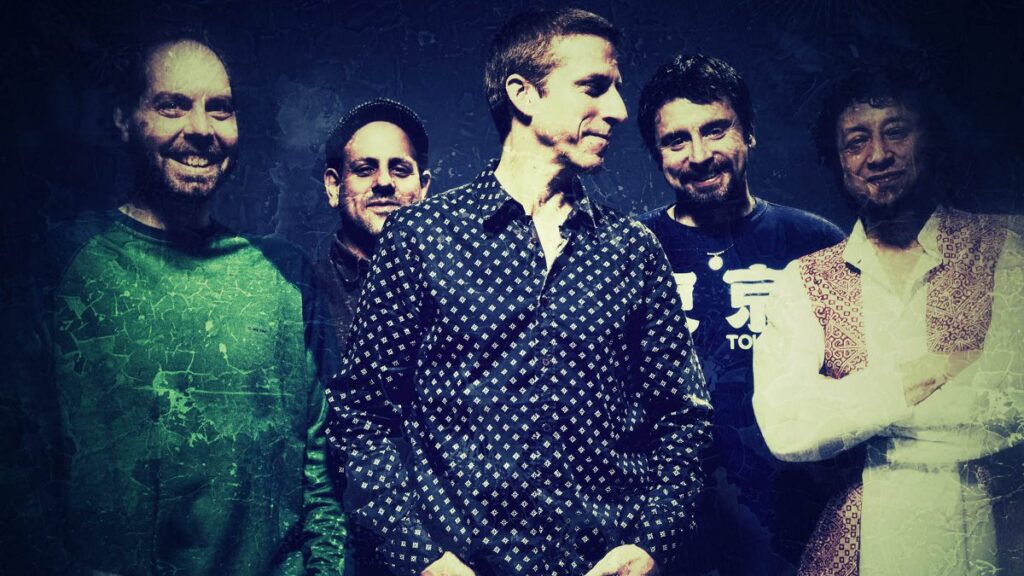 Bassist and composer Mike Rivard dropped by on Odyssey in May to talk about his band Club D’E’lf’s new recording, You Never Know, and revealed some of the roots of their eclectic mix of musical cultures. Rooted in large part in the very danceable but nonetheless complex rhythms of North Africa, and in the sound of the sintir, the bass lute that drives traditional Moroccan percussion ensembles, Mike and the group have come up with new music with that taps ancient grooves, but is very much alive in the present.

They have become something of a legend for their informal and invariably riveting performances at Cambridge’s Lizard Lounge over the last 25 years, and the new project illuminates the improvisational underpinnings that are the mark of their singular sound. The current band consists of many of the most respected musicians in the Boston area, including Duke Levine, Kevin Barry and David Fiuezynski (guitars), Brahim Fribgane (oud and percussion), John Medeski (keyboards), Dean Johnston (drums), and Mister Rourke (turntables and effects). This time instead of using overdubs and combined tracking, they all got together in the studio and just put down spontaneous performances in an effort to capture the spirit of their live shows.

Mike talked about how he had come across Ukrainian sand painter Kseniya Simonova’s remarkable work, which is also improvisational in nature, and how they ended up collaborating on a video of one of the band’s songs from the new album, “Dervish Dance” Here’s a link:
https://www.youtube.com/watch?v=w42lCl-S60Y

July 3– The ABC islands (Antigua, Bonaire and Curacao) are known as destination points for North American and European vacationers, but harbor some deep musical roots that are often overlooked, including influences from nearby Venezuela, Africa, and indigenous (pre-colonial) people. The language most spoken on the islands, Papiamentu, is also the delightful and lilting language of song there.

July 10- We embark on a journey up to the West Indies into the Caribbean this week, starting ib Trinidad (and Tobago), the legendary home of Calypso. There has been a remarkable revival of the muckraking traditions of this small island of late, inspired by the recordings of the 1950’s from artists like Lord Kitchener and Mighty Sparrow. Of course, soca and other styles continue there, too, along with the completely unique sound of the steel pans. We’ll look at both the history and the present.

July 17- We’ll move up the long island chain and listen to music from what has become known as the Lesser Antilles, including Grenada, Barbados, Martinique and Dominica (among others). The history of The Caribbean is largely one of European colonialism, along with strong African roots, and the music has always reflected this in complex ways- dance rhythms from West Africa in particular have been hugely influential.

July 24- The Virgin Islands have a little known musical history that has suffered from the tourism of the last half century, but is still alive in the sounds of the Scratch Bands and Quelbe songs that continue to be popular there. We’ll explore, and then move on the the powerhouse that is Puerto Rico, listening to legends like Tito Puente and Willie Colon alongside the Plena artists like Plena Libre who’ve shaped the island’s influential footprint on the world, and especially the US.

July 31- Haiti and the Dominican Republic share the island of Hispaniola, but have remarkably different musical personalities, and we’ll look into those as we peruse both Compas and Merengue traditions there. Don’t be surprised to discover that what you may have assumed about both countries is only a small part of the larger picture! As always we’ll look into new releases from everywhere to see what’s brewing.