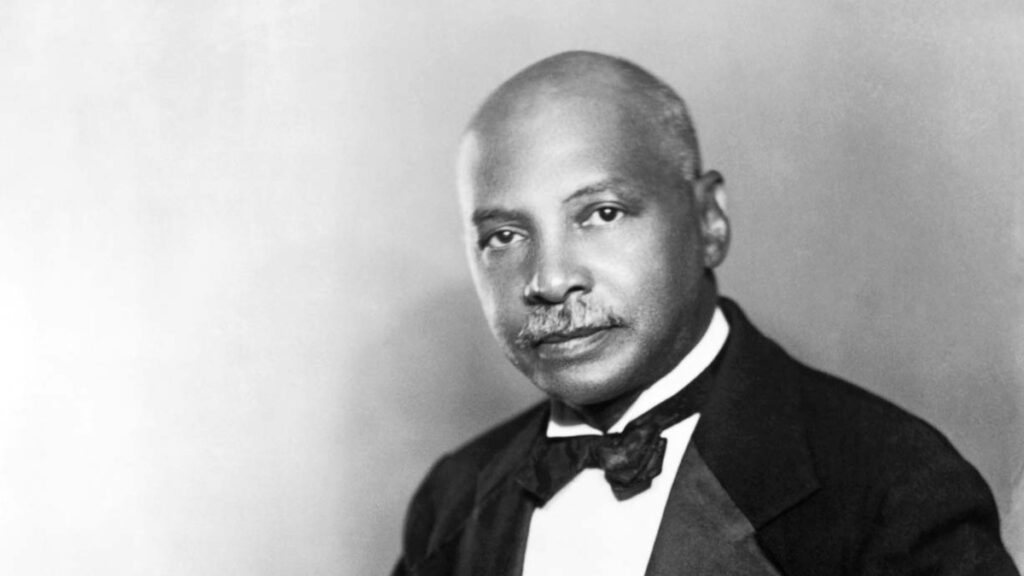 The Father of the Blues

In 1909, a Memphis brass band leader and cornetist named W.C. Handy wanted to popularize a new form called blues by fusing it with the popular ragtime sounds of the day. First, he added some blues shadings to a ragtime tune, then boldly reversed the formula, composing a 12-bar blues with just enough rag in the arrangement to appeal to his audiences. To replicate the sliding, dissonant blues sound, sound, he created what are still known as “blue notes.”

For inspiration, Handy recalled the hardest days of his life, unable to find work as musician, living homeless in St. Louis. Every day, he dreaded sundown, knowing he would spend another night on cold, cobbled city streets. The opening line of his new blues was, “I hate to see that evening sun go down.”

In an epic, 24-hour sleepless marathon, Handy wrote the classic “St. Louis Blues,” scored it for his popular brass band, and debuted it at a dance that evening.

The crowd went wild. Handy happily noticed that they began to dance differently, with more energy, waving their arms and whooping with joy. They made the band play “St. Louis Blues” over and over. Watching that dance floor, Handy knew he’d written a song that would bring the blues into the music mainstream.

Exhausted and elated, he rushed home to tell his wife about his triumph. I’ll let Handy tell the rest of the story, from his autobiography, Father Of the Blues.

“When the evening was over, the band piled into cabs and followed me home to celebrate the birth of the new blues. But Maggie, arms akimbo and rolling pin poised, was waiting for [me] at the door. I had been away from home 24 hours, burning up worlds of energy to produce a song, but maybe I should have stated where I was going and what I intended to do…But it’s an awkward thing to announce in advance your intention of composing a song hit between midnight and dawn…”
“The men of the band got a big kick out of my domestic drama. But after all, heads are meant to be bumped in this funny-paper world-–aren’t they?”

Folk Tales explores the legacy of W.C. Handy October 16, along with the rollicking history of rockabilly; Doc Watson’s country frolic with a Little Richard tune; the hilariously stupid reason Pat Boone said he didn’t want to record “Tutti Frutti;” and Rolling Stone’s curious pick for the most inspired rock lyric of all time. Also, what the Father Of the Blues himself credited with fathering the blues; the weird reason he was wrongly credited with writing “Shake Rattle and Roll;” and why Woody Guthrie boasted that he “never wrote an original melody on purpose.”

October 9, it’s the W.C. Handy of Irish music, influential 1920s fiddler Michael Coleman, and the surprising way he reacted when a policemen punched him for forgetting to play at his daughter’s wedding. Also, the trick Riverdance creator Bill Whelan pulled to get fiddler Eileen Ivers into he cast; why Tom Rush stopped singing his hit song, “No Regrets,” for years before recording it; and the classic song Joni Mitchell said was “probably terrible” when she sent a kitchen tape of it to Rush.

October 23, we remember the “hillbilly Shakespeare,” Hank Williams, including the black busker he credited for his bluesy sound, and why he said, “They’re slicing me up and selling me like bologna.” Also, the country classic by the guy who wrote the theme for Looney Tunes cartoons; and the real reason Joan Baez liked to perform barefoot.

October 30, it’s the man B.B. King called “the most influential blues guitarist of the 20th century,” Lonnie Johnson, along with the influential British rocker who changed his name to honor Johnson; the awful reason white jazz guitarist Eddie Lang had to use another name to record with Johnson; and how a TV talent show’s broken “Applause-O-Meter” made Patsy Cline a star. Hope you can join us at the Folk Tales corral. Carry it on —